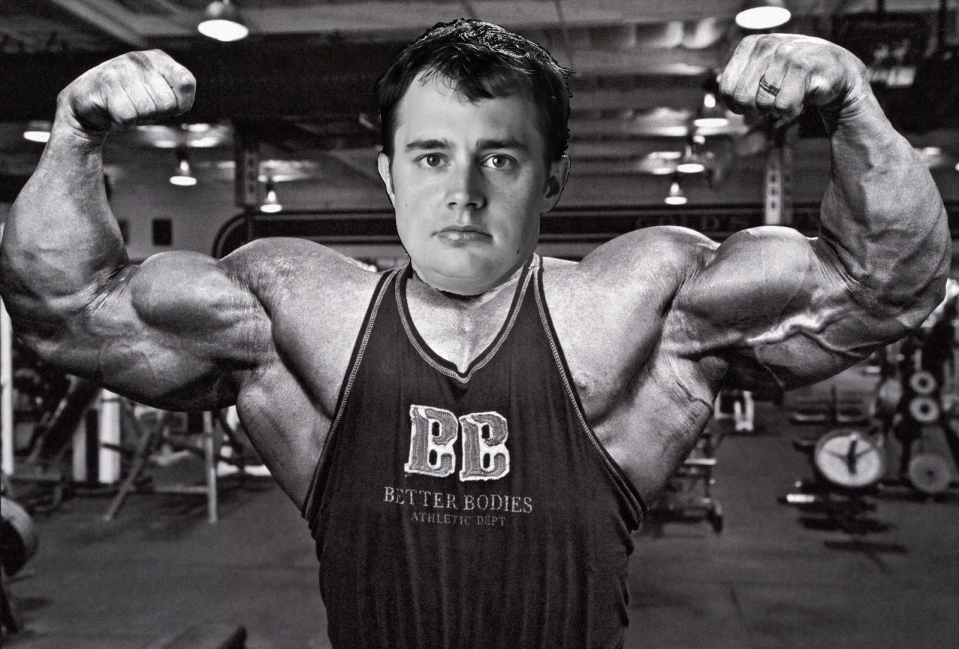 As part of my super summer fitness plan I partake in a lonely 1-2 hour walking crusade through the Eastern Central area of Kearney everyday. Yesterday I was two-thirds of the way into my march and my body was fully decorated with droplets of sweat and cock veins in my arms when two little kids began to follow me. They were two little boys about the age of 8 or so and they were walking 20-30 feet behind me. They followed me from the corner by Horizon Middle School to this bend in the road by the Kearney Reservoir. I’m sure they were looking at the ground often because it sounded like I was walking through mud, but there was no mud. I am on a very high protein and low everything else diet and this does some very interesting things to one’s innards. The plopping sound that was accompanying my every footstep is what dietary physicians commonly refer to as “the walking farts.”

The two little kids behind me must have choked on my fumes because they turned off into a yard and ran towards the lake. However, my noxious protein exhaust was merely chum in the waters for another young man. As I neared the corner of the reservoir that is across the street from the UNK campus, I heard an overly loud truck engine approaching and then slowing down behind me. I turned to my left to see a blue Chevy truck from the 80’s that was fully loaded with cackle-packs, 4 foot whipper antennas, a chrome cattle guard, Goodyear Swamp Raper tires, and a goddamn 14 inch lift kit come to a stop beside me.

The window of the truck began to slowly roll down and I was fully expecting to see one of my country folk friends inside but instead it was some goofy guy with glasses who was wearing a Larry the Cable Guy-esque sleeveless plaid button up shirt and glasses. He was probably in his early twenties or right out of high school and was about 6 feet tall and only weighed around 140 soaking wet, for lack of a better term he was a redneck nerd. Those types of guys are pretty common around these parts.

The redneck nerd smiled at me for a moment and then asked, “Hey buddy, you need a ride?” This was at 6:00PM on a sunny as fuck Saturday afternoon and I was wearing gym shorts and obviously looking like I was out getting my cardio on. So I gave him a weird look and said, “No dude, I’m good.” He quickly replied, “You look kind of tired and sweaty. You sure you don’t need a ride?” He said this while smiling and slowly cruising along side of me as I continued my crusade of fitness. It suddenly occurred to me. Holy shit this guy was trying to pick me up! I’m far from being a homophobe so this realization just made me laugh. I said, “No dude, I’m just out for a walk.” Once again he took another stab at it and said, “Awww come on man, I’ll just give you a ride.” Apparently this homosexual hillbilly had a hankering for a cock-hole sandwich smothered in underwear and he wasn’t going back to the sticks until he had his callused cowboy hands wrapped around one. Despite him pursuing another man, as a man I had admiration for his perseverance. “Nah dude, just keep driving.” I said in a slightly more commanding voice while waving him ahead with a sort of ‘get the fuck out of here’ gesture, but I was still smiling. He smiled and said, “That sucks man, maybe I’ll see you ‘round.” Then he rolled up his window and drove away.

In no way was I offended by this young man’s pickup attempt, but it did weird me out. Living in Kearney, Nebraska it isn’t often that a guy would do something so blatantly gay and be willing to risk the amount of teeth in their mouth by trying to pick up a random guy out for a jog that looks like he could kick the living shit out of them. I’m not exactly a fighter but if you saw this redneck nerd and I on opposite sides of a boxing ring you’d be a total dumbshit to bet your money on the redneck.

This brings me to a very important question and something that’s a big topic right now. Why are straight people so freaked out by gay people? I’m not gay and I’m perfectly comfortable around gay people. Except maybe the gay guys that are categorized as “bears”, but that’s because I’m afraid of bears and men who look like my dad but have the intention of rubbing my dick in their beard. I really do feel that the more homophobic a person is the more likely they are to be struggling with their own sexuality. Catholic priests, politicians, and coaches that end up smoking hog and molesting little boys are shining examples of this. I’m comfortable around gay people because I’m not gay, so the probability of me sleeping with a guy is zero. And just because there’s a guy in the room that is attracted to other guys doesn’t automatically mean he’s attracted to me. Gay haters are usually fat assed hill people and I think they tend to flatter themselves by thinking a gay person would have any interest in them. I’m attracted to women and that doesn’t mean I’ll fuck anything with a vagina… if I’m sober. I work at Rod and Lanny’s Beef Emporium across the street from the campus and just the other night a galaxy of female land planets orbited into the dining area and ordered meat potatoes to fill their faces with. One of these womanly planets outweighed the sun and was most likely changing the moon’s effect upon the oceans’ tide just by her existence, but she was also giving me the fish eye the entire time she was there. It boiled down to a case of me looking every other minute to see if she was still looking at me and then seeing that she was looking at me and it resulted in her thinking that I was staring at her, and she gave me a little smile every time our eyes met. I felt a little uncomfortable but then I realized that it was stupid because the odds of me going home with her were nil unless she got me really drunk and took me to a party where I couldn’t find a ride home and I didn’t want to sleep on the floor so she offered to let me sleep in her bed with her and I did. That is how I feel around gay guys, minus the being drunk and at a party where I can’t find a ride home and I don’t want to sleep on the floor so they say I can sleep in there bed with them. I’m creeped out by physical contact with other men and that started during my childhood.

I get super raging pissed at religious idiots that filter out all of the bizarre bullshit in the Bible and only choose to follow the tiny snippet that vaguely says being gay is wrong. The Bible does say that men cannot judge because only God is able to judge because the Bible teaches how to be Christ like and not how to be God. So these fucktards disregard their own fucking rulebook and choose to judge everyone according to their rulebook and they’re too goddamn stupid to know they’re even doing it. I couldn’t care less if Tom and Rod want to make out and pack each other’s shit in the privacy of their bedroom, and I don’t care if they want to get married either.  And, I hope that gay redneck nerd that tried to pick me up did end up finding some other muscly jock to be his handsome turd burglar for the night. I hope he’s biting a pillow as I type this because I admired his tenacity and shear bravery with his attempt of picking me up in broad daylight. Good luck to him and all horny people, gay or straight.